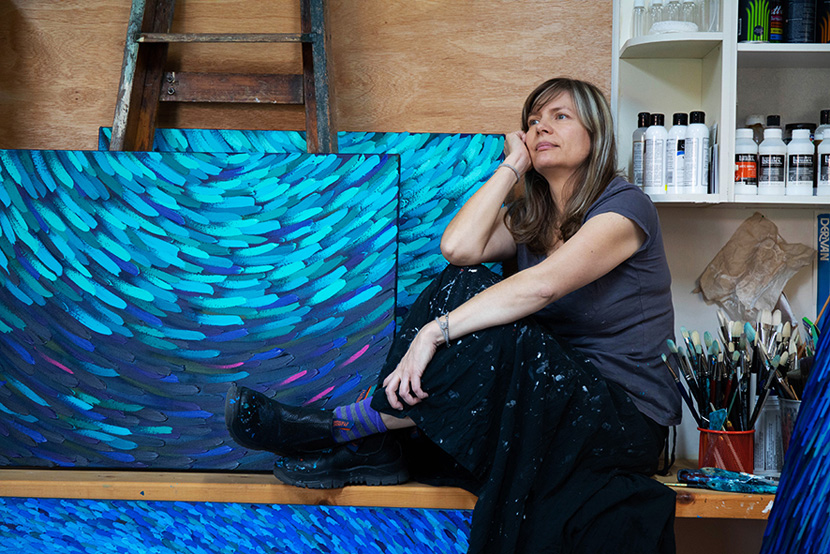 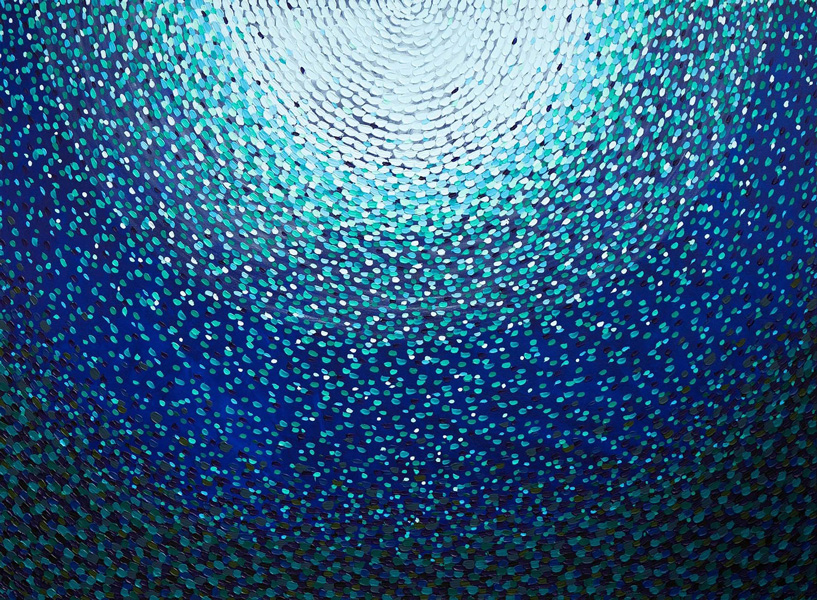 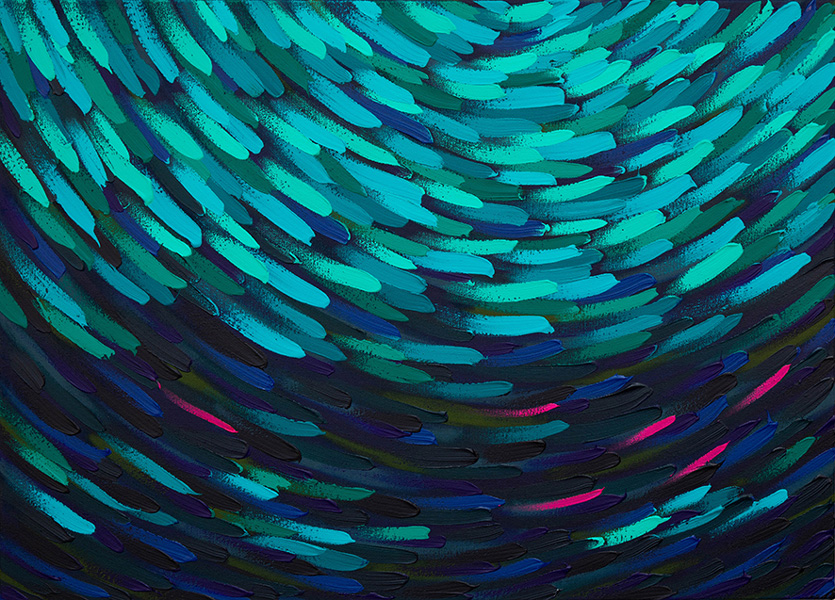 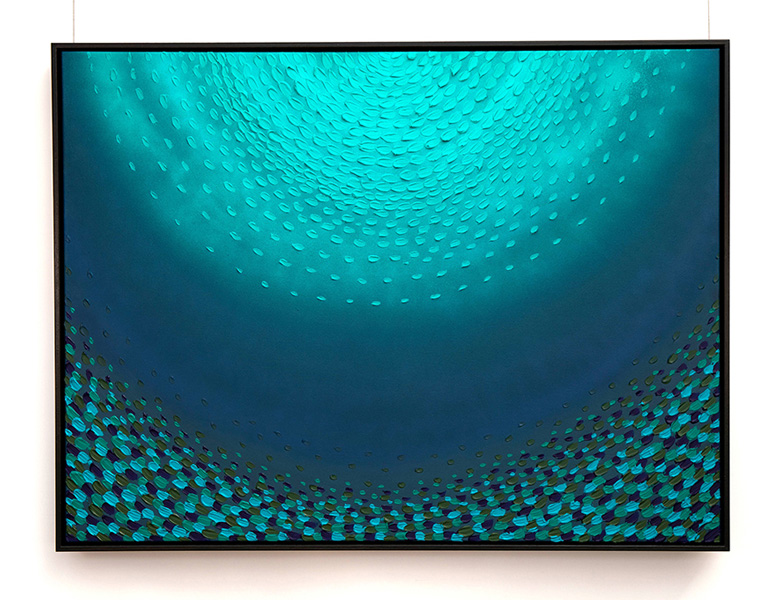 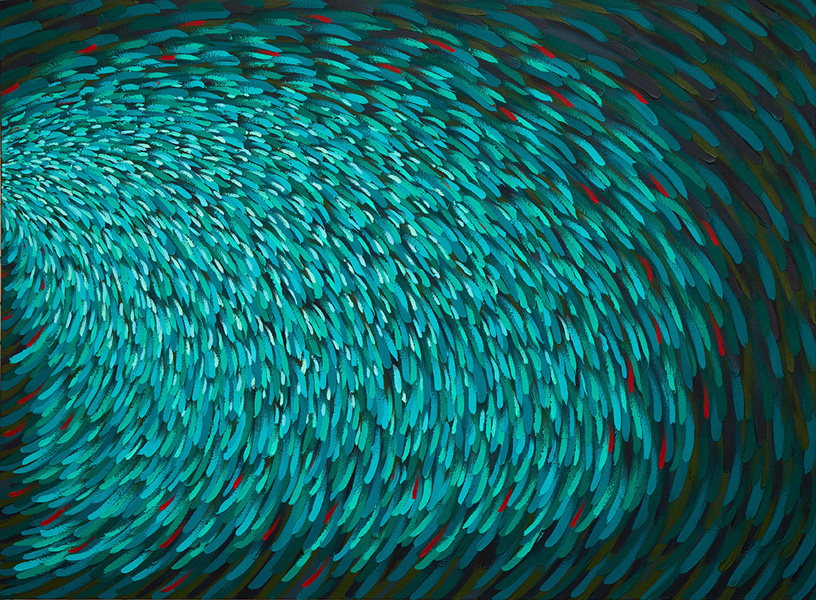 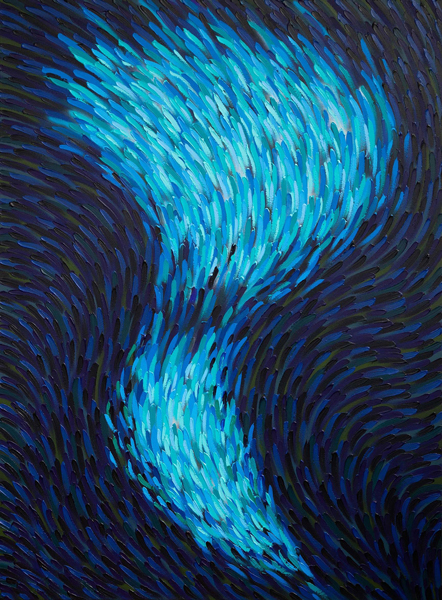 Practicing since the mid-1990s, Arja has completed her BFA and MFA at the University of NSW, Sydney. She has exhibited widely in both Australia and Finland, including twenty-one solo exhibitions. She has been a finalist in the prestigious Wynne Prize at the Art Gallery of NSW; Sculpture by the Sea, Sydney; Fisher’s Ghost Art Award, Campbelltown Arts Centre and the Sydney Living Museums Meroogal Women’s Art Prize. Arja has won numerous awards and grants, including a scholarship to study her MFA. Arja was also named 2004 Young Kalevala Artist of the Year, Finland. Arja Välimäki’s works are held in public and private collections in USA, Australia, UK, Hong Kong, Singapore, Germany and Finland.

My underwater series depicts abstracted underwater scenes where schools of fish swim and swirl in harmony. The impressionist application of a single colour per brush-stroke, each representing a fish, works to create a varied depth of field and an almost three-dimensional appearance. In vibrant blues and greens with pops of red, yellow or magenta, my paintings appear alive with movement, texture and colour. This series of works talks about my connection and love towards nature, especially the ocean. This series depicts abstracted underwater scenes and is full of movement, texture and an array of ocean colours. The titles of the paintings reveal the inspiration behind the paintings, schools of fish swirling around. I apply my brush strokes when in a Zen-like state of mind, where my mood dictates the final mark making. This practice is performed in solitude to sustain the focused, relaxed and joyful mental state. The colours I use are instinctively chosen to create an almost three-dimensional effect on the two-dimensional canvas surface. Recently, I have incorporated a new technique to soften areas of the paintings and to further the depth of field. I love exploring and experimenting with the mediums I choose to achieve a visual feast in the viewer’s eye.

My work investigates intersections between the forests of Finland and the oceans of Australia. These two countries in which I reside, at the far ends of the world, are at once opposite and alike in their landscape and culture. From forests to oceans, lakes to arid land, snow to heat, I deeply love both countries, their people, and their nature. I grew up in Finland with forests and have had the ocean as part of my daily life for a long time now, forming my great appreciation for both. I used to swim in the ocean almost every day until I had an accident in 1995, only two years after I migrated to Australia. I had stepped on a stingray, a very painful encounter that left me limping for eight years and crippled me with a fear of the ocean. Fear is a real, beautiful and a normal human experience, however I one day hope to overcome my phobia to again enjoy the ocean’s water beyond standing in the shallows. The majestic forests of Finland scare me somewhat too. I have often felt the presence of a large animal, a bear or a moose perhaps. I used to go deep into the forest to collect berries with my family and we would always make lots of noise to scare away possible predators. Through expressive application of thick acrylic paint, this body of abstract paintings explores my personal experiences as a Finnish migrant in Australia, especially my encounters with the underwater world and landscape, and my appreciation for the beauty of nature.